Sodomy Laws in the US and around the World 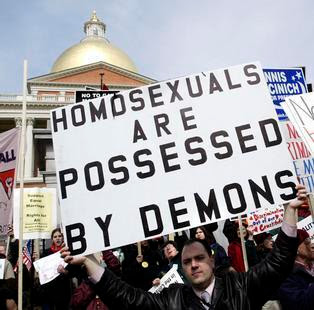 Michael Hardwick is arrested for sodomy after a police officer observes him having sex with another man in his own bedroom in Georgia. Although the district attorney eventually dropped the charges, Hardwick decided to challenge the constitutionality of Georgia’s law.

“John and Mary Doe,” who joined in Hardwick’s suit against Michael Bowers, the attorney general of Georgia, maintained that the Georgia law “chilled and deterred” them from engaging in certain types of sex in their home. But in 1986, the Supreme Court handed down its decision in Bowers v. Hardwick, ruling by a 5-4 vote that states could continue to treat certain types of consensual sex as criminal acts.

Apparently, Justice Byron White had characterized the issue not as the right to privacy in one’s own bedroom, but rather as the right to commit sodomy. Viewed in this narrow manner, it was no surprise that he was unable to find such a clause in the Constitution. Justice Lewis Powell, who also voted to uphold the law, later called his vote a mistake.

In June 2003, the U.S. Supreme Court overturned a Texas law under which two men had been arrested for having consensual sex at home. The 6-3 Lawrence v. Texas decision reversed the infamous 1986 Bowers decision and finally dealt a death blow to sodomy laws throughout the country.

In its landmark ruling Lawrence v. Texas, the Supreme Court ruled that anti-sodomy laws —sometimes referred to as “crimes against nature” laws — are unconstitutional. But 12 states continue to keep such laws on their books. Of 14 states that had anti-sodomy laws, only Montana and Virginia have repealed theirs since the Supreme Court ruling, while anti-sodomy laws remain on the books in Alabama, Florida, Idaho, Kansas, Louisiana, Michigan, Mississippi, North Carolina, Oklahoma, South Carolina, Texas and Utah. 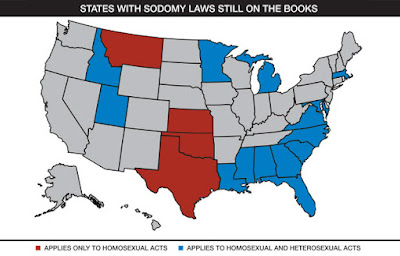 You may believe anti-sodomy laws are not harmful because they can’t be enforced. But they are an important symbol of homophobia for those who oppose LGBT rights. What’s more, the laws create ambiguity for police officers, who may not be aware they are unconstitutional.

If a policeman looks it up, he will see that sodomy is a violation of Louisiana state law, for example, according to Marjorie Esman, executive director of the American Civil Liberties Union of Louisiana.

Sodomy Laws around the World

In the recent years, sodomy related laws have been repealed or judicially struck down in all of Europe, North America, and South America, except for Antigua and Barbuda, Barbados, Belize, Dominica, Grenada, Guyana, Jamaica, Saint Kitts and Nevis, Saint Lucia, Saint Vincent and the Grenadines, and Trinidad and Tobago.

There have never been Western-style sodomy related laws in the People's Republic of China, Taiwan, North Korea, South Korea, or Vietnam. Additionally, Vietnam, Laos and Cambodia were part of the French colony of 'Indochine'; so if there had been any laws against male homosexual acts in those countries, they would have been dismantled by French colonial authorities, since male homosexual acts have been legal in France and throughout the French Empire since the issuing of the aforementioned French Revolutionary penal code in 1791.

This trend among Western nations has not been followed in all other regions of the world (Africa, some parts of Asia, Oceania and even western countries in the Caribbean Islands), where sodomy often remains a serious crime. For example, male homosexual acts, at least in theory, can result in life imprisonment in Barbados and Guyana.

In Africa, male homosexual acts remain punishable by death in Mauritania, Sudan, and some parts of Nigeria and Somalia. Male and sometimes female homosexual acts are minor to major criminal offences in many other African countries; for example, life imprisonment is a prospective penalty in Sierra Leone, Tanzania and Uganda. A notable exception is South Africa, where same-sex marriage is legal.

In Asia, male homosexual acts remain punishable by death in Iran, Saudi Arabia, Brunei, the United Arab Emirates, and Yemen; but anti-sodomy laws have been repealed in Israel (which recognizes but does not perform same-sex marriages), Japan, Kazakhstan, the Philippines, and Thailand. Additionally, life imprisonment is the formal penalty for male homosexual acts in Bangladesh, the Maldives, Myanmar, Pakistan, and Qatar. 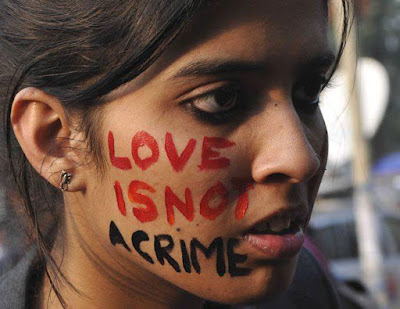 Posted by Michael Pekker at 7:49 PM