Why the Black Dot Campaign is NOT the Solution for Battered Women?

Once a while, I briefly review my Spam folder in the email manager, and chose selectively to read some emails. This is the email I got yesterday:

If you see a person that has a black dot on the palm, please call the police immediately. The black dot means that the person is in trouble.

“Black Dot Campaign” started on Facebook and it’s a campaign to recognize the victims of domestic abuse. That simple black dot on their hand signifies a call for help.

“The black dot on the hand lets professionals know you’re a really vulnerable domestic violence survivor, and that you need help but can’t ask because your abuser is watching your every move. In just 24 hours, the campaign has reached over 6,000 people worldwide, and has already helped 6 women. Please spread the campaign, and post a picture of your hand with the black dot, to show your support to all survivors of domestic violence,” stated the organizers behind this campaign. 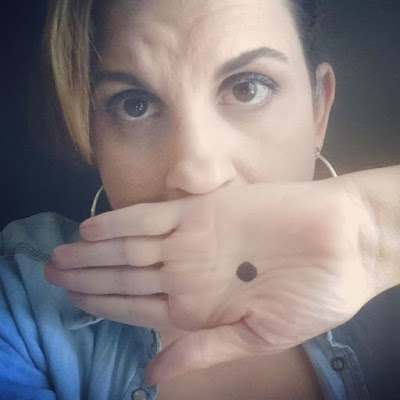 Story From Survivor of Domestic Violence:

“I’m heavily pregnant and the baby’s father is very abusive. With words, his hands. I’ve been petrified for so long and even more with the baby coming soon. I was at the hospital yesterday, he was with me, he never leaves my side anymore. I had to have an examination so the consultant asked me to lie on the bed and drew the curtain. I leant over and took the pen out of his pocket, pulled his hand over to me and wrote HELP ME. I didn’t have to say a word. “This campaign gave me the strength and the idea how to ask for help. I am now safe somewhere else thanks to that consultant and the black dot campaign. Thank you, 1 week to go until my due date and I am finally safe.”

The idea seemed really creative, since we know how many people, mostly women, are subject of the severe domestic violence, both physical and emotional.

The idea of a black dot on victims' hands, to help tackle domestic violence, has been widely spread on Facebook - but also heavily criticized.

The idea behind the Black Dot campaign is this: victims of domestic violence can draw a black dot on their hand as a silent signal. Once it becomes widely enough understood, people who see the dot on their friends' hands can approach them and have a conversation about abuse.

It's certainly now widely known: the campaign page racked up 40,000 likes, with many of its posts shared even more widely than that, and the founder says Facebook's statistics indicate it's been seen by millions (although the page was later taken down).

But as the Black Dot has garnered media attention, it's also been criticized by people who worry that a specific symbol highlighting domestic violence would draw unwanted attention to victims - and thus risk the wrath of their abusers. Others have pointed out that professionals and support agencies won't have received training on what to do when spotting someone with a black dot on their hand.

"It seems a good idea but with wide coverage then the abusers will know what this thing means," one man wrote on the campaign's Facebook page. Now, the woman behind the campaign says critics have missed the point. In fact, she never meant for people to post selfies of their hands with a dot.

The founder is a British woman who wishes to remain anonymous because of her history as a domestic abuse victim. She told that although it started on Facebook, the campaign was never about encouraging abuse victims to post pictures of themselves online.

"I imagined it as a tool to start face-to-face conversations between friends, or with professionals," she told BBC Trending. "I was basing it on my experiences and I was thinking, how could I prompt people to talk about domestic violence? A black dot is easy to make, and easy to erase. As a female, you could go to the toilet, draw one on with mascara, and then later wipe it out. Being in the center of your palm, you could close your palm and hide it from view.
"As a way of seeking help, it's not going to be a solution for everybody. As a victim, you know what triggers your abuser," she says. "So if it's not safe to draw a black dot, don't do it. Just because you're a victim doesn't mean you're stupid - you know yourself what is safe and what is not safe."

So, the campaign had reportedly helped 49 women to leave abusive relationships, but received criticism from some arguing that, if the symbol started to be recognized by perpetrators, it would risk making situations worse for victims. 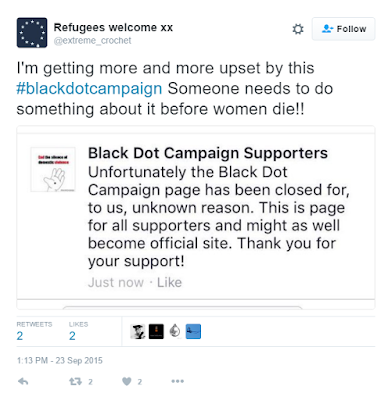 Sandra Horley, chief executive of domestic violence charity Refuge, explained why she believed the campaign might be dangerous for some women to take part in. “We are concerned that the Black Dot campaign has become very public and well-known, so therefore it may be dangerous for some women if they take part,” Ms Horley said. “Women who mark themselves with a black dot could unintentionally inform their abusive partner that they are trying to reach out and access support. This could have grave consequences – two women a week are killed in England and Wales by a current or former partner, 70 per cent of domestic homicides occur at the point at which a woman separates from a man. Refuge would encourage anyone planning to leave an abusive partner to contact a specialist organization for support”.

Other experts say that today the campaign has taken the form of a potentially dangerous scam: If a domestic violence perpetrator learned of the campaign and then saw the black dot, they might lash out in response. Additionally, the vast majority of “professionals” referred to in the viral post is likely unaware of the campaign and how to deal with a black dot should they see one. 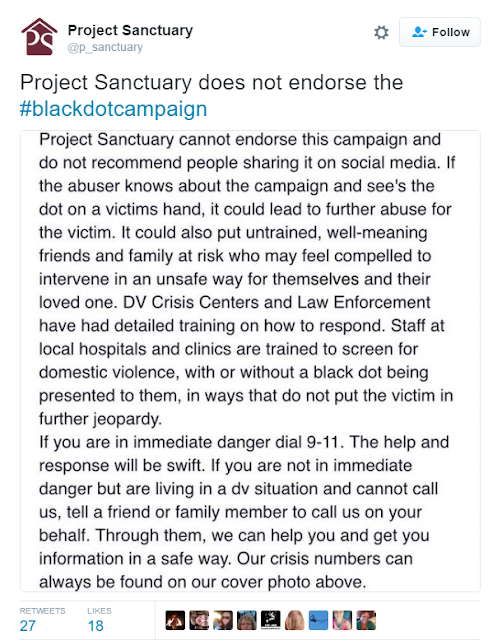 “The Black Dot Campaign is a very well-meaning idea, but a bad idea nonetheless,” said Dina Polkinghorne, executive director of domestic violence prevention organization Project Sanctuary in a statement. “The campaign is getting a lot of attention, so abusers may also be aware of it. They might question why their partner would have the dot on their hand. A well-meaning family member could also see the dot, and inadvertently compound the violence.”

“When would it be appropriate to use it?” she continued. “At the grocery store? At the doctor’s office? Someone who was being completely controlled would be told by the abuser that they want to be in the exam room, so the victim would not be able to tell their doctor that they were in a domestic violence situation.”

In an interview with a local ABC affiliate, Peninsula Mental Health Services’ Dr. Michael Finegan agreed: “The factor [for the campaign’s seeming disintegration] was that the abuser, highly controlling, would see the black dot and that that would facilitate more violence or more abuse.”

While the Black Dot Campaign may have been started with good intentions, it does not yet offer a safe and reliable way for victims of domestic violence to get help. It is not supported by any official organizations, and the campaign on Facebook has been closed. Therefore, please do NOT follow the original campaign guidelines, and find more reliable ways to inform the authorities, that you are a victim of the domestic violence. For your sake! For sake of your kids! Do not let a domestic violence to become a norm in your family. You deserve better than that! 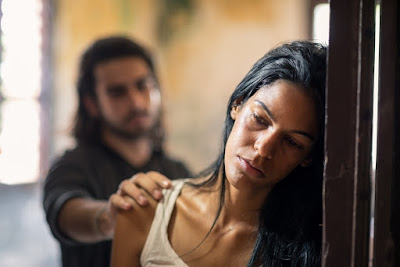 First established in 1996 by the Violence Against Women Act and supported in part by funding from the Family Violence Prevention and Services Act, the National Domestic Violence Hotline is the only national organization that directly serves victims of domestic abuse, their friends and family.

Highly-trained, expert advocates are available 24/7 by phone 1-800-799-SAFE (7233) to talk with anyone who is affected by physical, emotional, sexual or financial abuse. To date, The Hotline has answered more than 3.5 million calls, chats and texts from people seeking assistance.

The Hotline also offers an online chat service at thehotline.org that is available Monday through Friday from 7 a.m. – 2 a.m. CT. The chat feature provides another lifeline for those who do not feel safe speaking by phone.

The services are completely free and confidential, and we have the largest and most comprehensive database of local and national resources in the country. Along with these resources, we offer lifesaving tools, immediate support and hope to empower victims to break free of abuse. 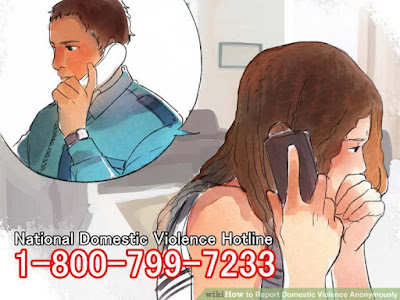 Posted by Michael Pekker at 7:15 PM