Article I. In the event of a territorial and political rearrangement in the areas belonging to the Baltic States (Finland, Estonia, Latvia, Lithuania), the northern boundary of Lithuania shall represent the boundary of the spheres of influence of Germany and U.S.S.R. In this connection the interest of Lithuania in the Vilna area is recognized by each party.

Article II. In the event of a territorial and political rearrangement of the areas belonging to the Polish state, the spheres of influence of Germany and the U.S.S.R. shall be bounded approximately by the line of the rivers Narev, Vistula and San.

The question of whether the interests of both parties make desirable the maintenance of an independent Polish States and how such a state should be bounded can only be definitely determined in the course of further political developments.

In any event both Governments will resolve this question by means of a friendly agreement.

Article III. With regard to Southeastern Europe attention is called by the Soviet side to its interest in Bessarabia. The German side declares its complete political disinteredness in these areas.

Article IV. This protocol shall be treated by both parties as strictly secret.
Moscow, August 23, 1939.

With the stroke of a pen 77 years ago, two men changed the world and sealed the fate of millions. Those two men were the foreign minister of Nazi Germany, Joachim von Ribbentrop, and his Soviet counterpart, Vyacheslav Molotov. On August 23, 1939, they signed a non-aggression pact, promising not to interfere in case the other went to war. 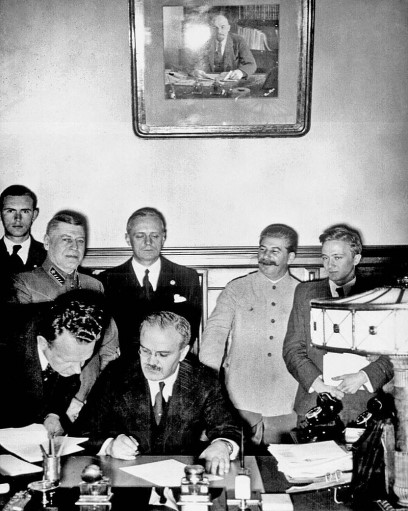 That public announcement was shocking enough: The two totalitarian states had been at loggerheads for years. But they also signed a second, secret agreement that carved up Eastern Europe between them.

“In fact, the Nazi-Soviet Pact as the kick-off for World War II is probably the most surprising scenario that anyone could have imagined," historian Roger Moorhouse says. "That’s how you have to view it from the perspective of August 1939. The world was absolutely dumbstruck by this deal.”

Those twin agreements did in fact set the stage for the start of World War II. Within days of signing the pacts, now confident that the Soviets would not oppose him, Hitler invaded Poland. Britain and France declared war on Germany, and the war was underway.

A couple of weeks later, the Soviet Union invaded Poland from the east to grab its share of the spoils. In 1940 it followed up by occupying Estonia, Latvia, Lithuania and the Romanian province of Bessarabia. Britain and France protested, but with their forces already taking on Germany, they couldn't afford to fight Stalin as well.

After Poland surrendered, Stalin and Hitler issued a joint statement calling for Britain and France to accept the new order and make peace, stating, “If, however, these efforts of both governments remain unsuccessful, it will be established thereby that England and France bear the responsibility for the continuation of the war.”

In December 1939 Stalin assured Hitler that the alliance between Russia and Germany was “cemented in blood”. Attacks on fascism ceased to appear in the Russian press and the world’s Communist parties switched from supporting a “people’s war against fascism” to opposing “imperialist war” in the wake the pact.

Eight hundred exiled German communists were transferred across the Soviet border into the welcoming hands of Third Reich’s Gestapo. 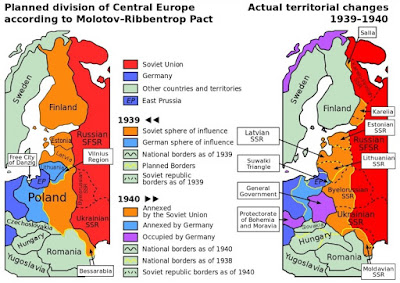 For a time, the pact worked well — and showed how similar the two states really were.

In the areas of Eastern Europe that they did occupy, the Nazis and Soviets set up occupation zones. Interesting is that both occupation regimes governed in remarkably similar ways, targeting remarkably similar groups of people. Army officers and officials of the old regimes, intellectuals, priests and community leaders were detained en masse. Thousands were executed or deported to gulags and concentration camps.

The Nazis obviously also targeted Jews, but many Jews fled Stalin’s control as well — even seeking sanctuary in Nazi areas. In one remarkable moment, two trainloads of refugees going opposite ways met at a border. They were equally astonished that anyone should want to head in the other direction.

But indeed, both Moscow and Berlin indulged in massive population transfers, each trying to recreate Eastern Europe in their preferred image. Thousands of ethnic Germans were moved from the Soviet zones to the German ones, while thousands of Poles were deported from areas now designated "German." Still others were shipped off as slave laborers to Germany proper. Many people simply moved of their own accord to escape the new states where they were denied basic rights, and some of them eventually came to America.

For both regimes, the pact was advantageous beyond the political realm. Between August 1939 and June 22, 1941, Moscow delivered petroleum products, grain, nickel, manganese and chromium for steel production, phosphate, wood and other materials.

In return, the Third Reich delivered fighter jets, explosive chemicals and bombs, radio stations, industrial facilities and even the cruiser Lützow, which the Soviets renamed Petropavlovsk. In addition, the Soviet Union received a loan of 200 million reichsmarks. 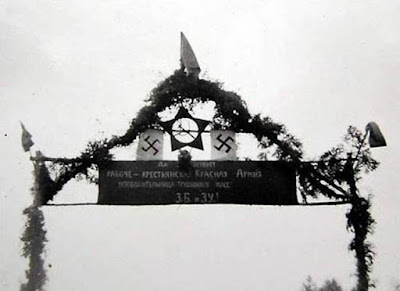 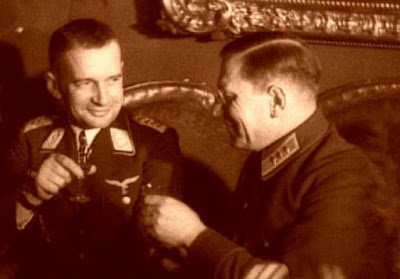 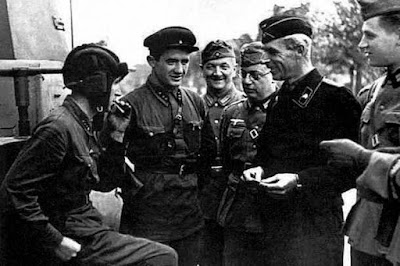 The most important element in German-Soviet cooperation between 1939 and 1941 wasn't the cooperation between the armies at all, but rather the economic deliveries on a large scale that resulted. There are reports, even from June 22, 1941 - the day the Wehrmacht invaded the Soviet Union - that the soldiers encountered trains with Soviet deliveries. The Soviets were true to the contract until the end.

Another "partnership" existed between the NKVD - the Soviet secret police - and its German counterpart, the Gestapo. A secret agreement approved by the Soviet leadership gave anti-fascist Germans and Austrians who had fought against Hitler to the Gestapo. Many dozens of them, including well-known German communist Margarete Buber-Neumann, were handed over. The majority were murdered.

But the Nazi-Soviet pact didn't last. In late 1939, the Soviets also tried to invade Finland. The Finns refused to roll over. Despite being tremendously outnumbered and outgunned, they improvised a defense and made the best of the terrain and the ferocious winter weather.

One innovation of that campaign was the gasoline bomb, designed for use against the air intake ducts on Soviet tanks. Molotov, the Soviet foreign minister, had called the Russian invasion a "humanitarian" move; Soviet propaganda even claimed that bombs dropped by Soviet planes were food aid. In a sarcastic tribute, the Finns christened their homemade weapons "Molotov cocktails," joking that they should have drinks along with the Soviet-provided "meals." In the end, the Soviets suffered a brutal loss in the "Winter War" with the Finns.

The Germans were astonished at how badly the Soviets performed in the Winter War, a performance that made them believe they could turn on Stalin before finishing off the stubborn Brits in the west. In June 1941, Hitler attacked. Many historians claim that Stalin was stunned by the invasion and refused to accept that the news was true, leading to disastrous losses by the Red Army in the early days of the war.

Once the Soviet Union recovered and defeated the Nazis, Moscow re-wrote history. The Nazi-Soviet Pact morphed from a delusion to a clever way to buy time, which allowed the Soviet Union to re-arm. Britain and America also tended to airbrush the Nazi-Soviet pact out of mainstream history, afraid that it would damage the popular narrative of the "Grand Alliance" that beat the Nazis.

And that's only the public half of the alliance: the existence of the secret protocol was officially denied by the Soviet Union until its dying days in 1989. 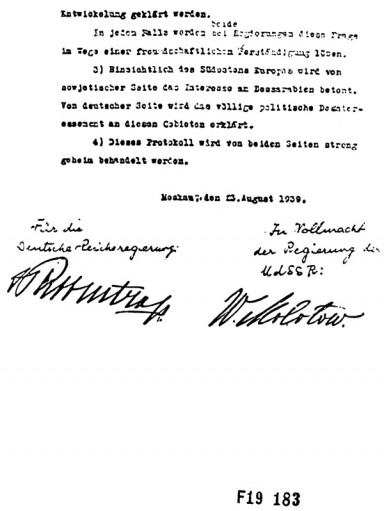 In 2014, the Russian president Vladimir Putin made the comments at a meeting with young historians in Moscow that there was nothing bad about the Nazi-Soviet Pact, calling it “ the great achievement of Soviet diplomacy” and suggesting Britain and France were to blame for Adolf Hitler's march into Europe.