Why You Do Not Use Pluto.TV – the Best Cord-cutting App?

Pluto TV, a video streaming service targeting cord cutters by offering a TV-guide like experience that connects you to hundreds of online channels, has raised $30 million in Series B funding, valuing the business at $140 million. The new funding comes from ProSieben of Germany, one of Europe’s largest independent media companies, and lifestyle media company Scripps Networks Interactive. The additional capital will help to fuel Pluto TV’s expansion into the European market, the company says.

Pluto TV is a free service that tries to mimic the cable box experience, only with Internet channels instead of traditional ones. Pluto’s website and apps offer dozens of channels, ranging from mainstream news to stand-up comedy to extreme sports, all strung together from web sources such as YouTube and Vimeo. There’s even an entire channel dedicated to cat videos (and another one for dogs). It has a desktop website and dedicated apps for Android TV, Amazon Fire TV, iOS, Android, and PC, and it also supports Chromecast.

Unlike other online streaming services, which also cater to those who still subscribe traditional television, Pluto TV from the start has more narrowly focused on acquiring consumers who are abandoning their cable and satellite TV subscriptions. However, instead of offering on-demand TV and movies like Netflix, Pluto TV attempts to replicate the TV experience through online streams that you can “tune into” much like TV broadcasting. 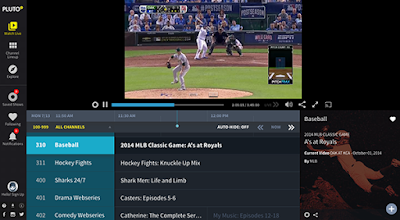 So where is Pluto TV getting all of this content?

As it turns out, Pluto TV is getting its content from the same places that cord cutters do. They’re supplying videos from YouTube, Vimeo, DailyMotion, and other streaming sites. All Pluto TV is doing is saving you the legwork of finding your next favorite show. They’re restoring the simplicity of channel surfing (without restoring your hefty cable bill).

That said, Pluto TV doesn’t only use freely available content. They also have a bunch of agreements with other content providers. In the U.S., the company has over 75 content partnerships with TV networks, studios, publishers and digital media companies, including Sky, NBC, A&E, CBSi, Bloomberg, Paramount and others.

On a basic level, using Pluto.TV is as simple as launching the app or heading to the website. The last channel you visited starts playing automatically, with a channel guide you can scroll through on the bottom half of the screen. Pluto’s website and mobile apps let you bookmark channels, so you can view your favorites without sifting through the full guide. 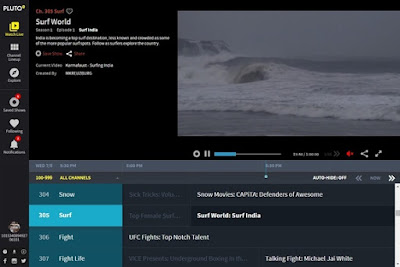 The web and PC versions also include a save button, so you can go back and re-watch anything from Pluto.TV’s linear programming schedule. It’s basically just a bookmark, but in this context it’s sort of like a descendant of DVR.

You may download applications for may platforms, or watch live through the Web Interface without downloading any software to your electronic devices: http://pluto.tv/watch/newsy 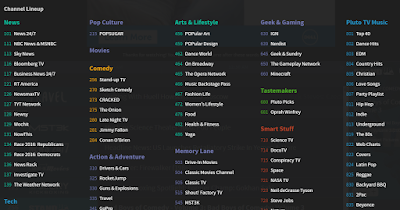