Japan, Luxembourg, or Emirates: Which Passport is the Best?

For some people, a passport is a portal to the world. For others, it is a barrier to the travel freedom they seek.

The Henley Passport Index (HPI) is a global ranking of countries according to the travel freedom for their citizens. It started in 2006 as Henley & Partners Visa Restrictions Index (HVRI) and was modified and renamed in January 2018. The site provides a ranking of the 199 passports of the world according to the number of countries their holders can travel to visa-free. The number of countries that a specific passport can access becomes its visa-free 'score'. In collaboration with the International Air Transport Association (IATA), and based on official data from their global database. Henley & Partners has analyzed the visa regulations of all the countries and territories in the world since 2006.

In 2019, Japan’s passport is ranked the strongest in the world for the second year running, allowing visa-free access to 190 countries to an estimated 17.5 million outbound Japanese travelers last year.

Asian countries dominate the index’s top spots, with Singapore and South Korea ranked second, with access to 189 destinations visa-free or visa-on-arrival. China has also jumped 16 places in the past two years, from 85th in 2017 to 69th in 2019.

European countries still fare well, with Germany and France ranked third, with 188; and Denmark, Finland, Italy and Sweden fourth, with 187.

US, sharing its score of 185 with Austria, Netherlands, Norway, Portugal, Switzerland, and UK, ranked sixths.

The past decade has seen a marked decline in many African countries’ rankings, including Sierra Leone, Nigeria, Gambia and South Africa, which have all dropped at least 18 places since 2009. Afghanistan and Iraq hold joint-last place for the third year in a row, with a current visa-free/visa-on-arrival score of 30.

Despite a rising isolationist sentiment in some regions, global mobility is improving, with an increase in visa-free access and mutually beneficial agreements overall. Historical data from the index shows that in 2006, an average passport holder could travel to 58 destinations without needing a visa; by the end of 2018 this number had almost doubled to 107.

“The general spread of open-door policies has the potential to contribute billions to the global economy, as well as create significant employment opportunities around the world,” said Christian H Kälin, chairman of Henley & Partners and index founder. “South Korea and the United Arab Emirates’ recent ascent in the rankings are further examples of what happens when countries take a proactive foreign affairs approach, an attitude which significantly benefits their citizens as well as the international community.” 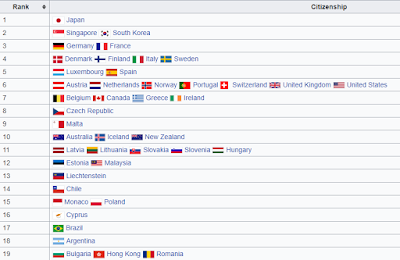 Surprisingly, here is United Arab Emirates capture the highest ranking – power rank 1. USA passport is ranked 3, and Japanese passport is only ranked 4. May be that is because in 2017, The Passport Index was assigned to monitor the development of the newly launched UAE Passport Force Initiative, with the aim to position the Emirati passport on the list of the five most powerful passports in the world by 2021.
As you see, the target achieved ahead of the schedule. 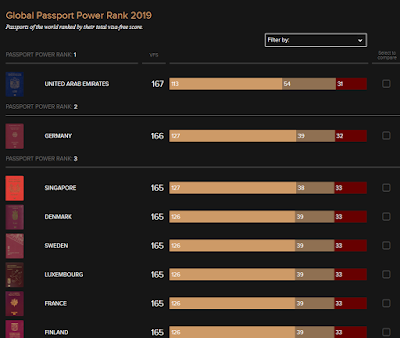 The Nomad Passport Index ranks 199 citizenships on five factors, more than any other passport index.
It is designed to show the best citizenships in the world to hold on the basis of visa-free travel, international taxation, perception, dual citizenship, and personal freedom.

It also paints a different picture of the best passports in the World to hold, and neither Japan, USA, or UAE can be seen among top countries. 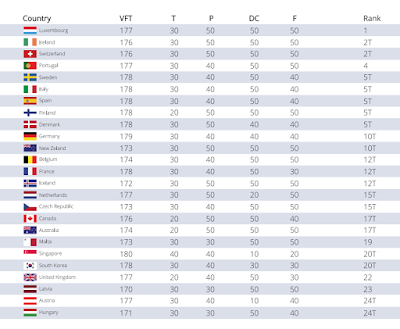